The rise of rewarded video ads have radically changed the business model for many mobile game developers.

Previously, there was a hard split between payers and non-payers, with developers trying hard to push players over that line, sometime with rather aggressive retailing techniques.

Rewarded video ads have soften the divide, however, allowing developers to generate large amounts of indirect revenue from non-payers, as well as educating them about the value proposition of in-game currency.

But what’s the best way to balance a game economy in terms of advertising revenue and IAP?

In this special sponsored Shai Sasson, articles with mobile analytics and monetization company Woobi clarifies on How do you balance your ad vs IAP monetization strategies?

One of the main challenges when it comes to F2P games is generating revenue. There is no doubt that Freemium is here to stay – with over 90% of all games revenue on iOS App Store, and Google Play coming from freemium apps. However, with paying users accounting for only 1%-2% (5% if you are really lucky) – game developers need to seek additional revenue sources to monetize the non-paying users – yet without compromizing in app purchases (IAP).

Is it even possible? Can ads and IAP co-exist within the same game economy?

Let’s start with putting a few obvious truths on the table:

Let’s take a look at the most important monetary success factors for a game developer:

That very much depends on how you go about it.

When ads are well integrated into gameplay, they offer the user true value and take the user’s own preferences into consideration. That way, game publishers expose users to the benefits of premium elements with little to no impact on the gaming experience. Users who become familiar with these premium items are more likely to look for them again – and therefore we actually see an increase in the chances of them becoming paying customers.

Question #2: How to build a game economy that maximizes both IAP and Ad-Based revenue generation?

When it comes to IAP and considering 95% of all IAP revenues come from 5% Whales – your mission would be to locate them, reel them in, monetize them and RETAIN! This has a lot to do with the structure of your in-game economy, the level benefits gained through purchases and their longevity (or lack thereof), the attractiveness of repeated purchase and the delicate balance between purchasing a competitive advantage – yet not paying your way to an easy win.

Take a look at this user-type segmentation issued by EEDAR. Does this resemble your game’s user base? 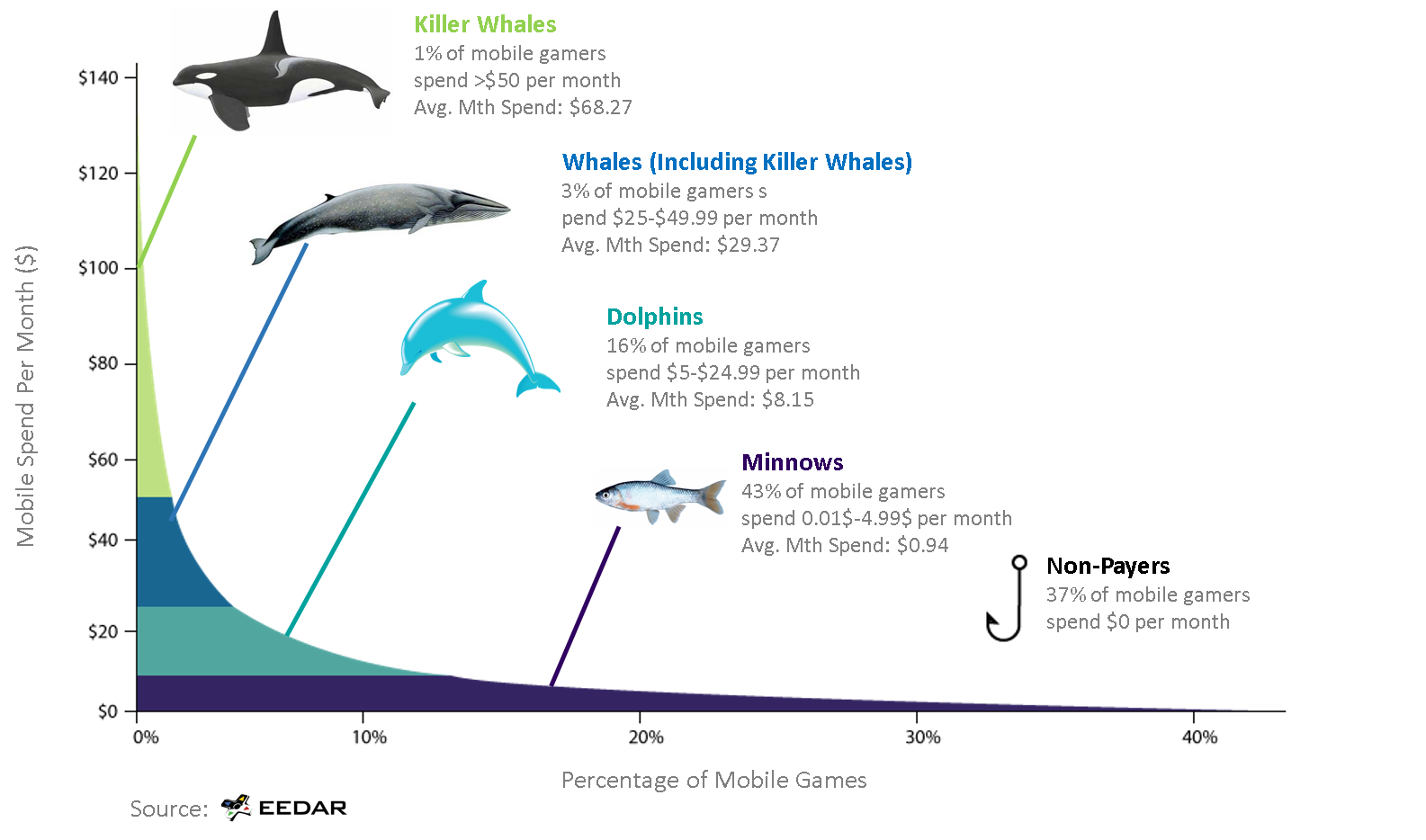 Basically – as a developer, you have 2 main factors to consider:

As you can imagine – some of your users belong to both high-end groups (monetized and engaged), some to either and some to neither. You can sort your user-base to as many segments as you like, and take different approach towards each group.  In the example below, a common practice would be to decrease the exposure to value exchange ads as the numbers grow, and to disable all ad formats at the ‘gold’ section: 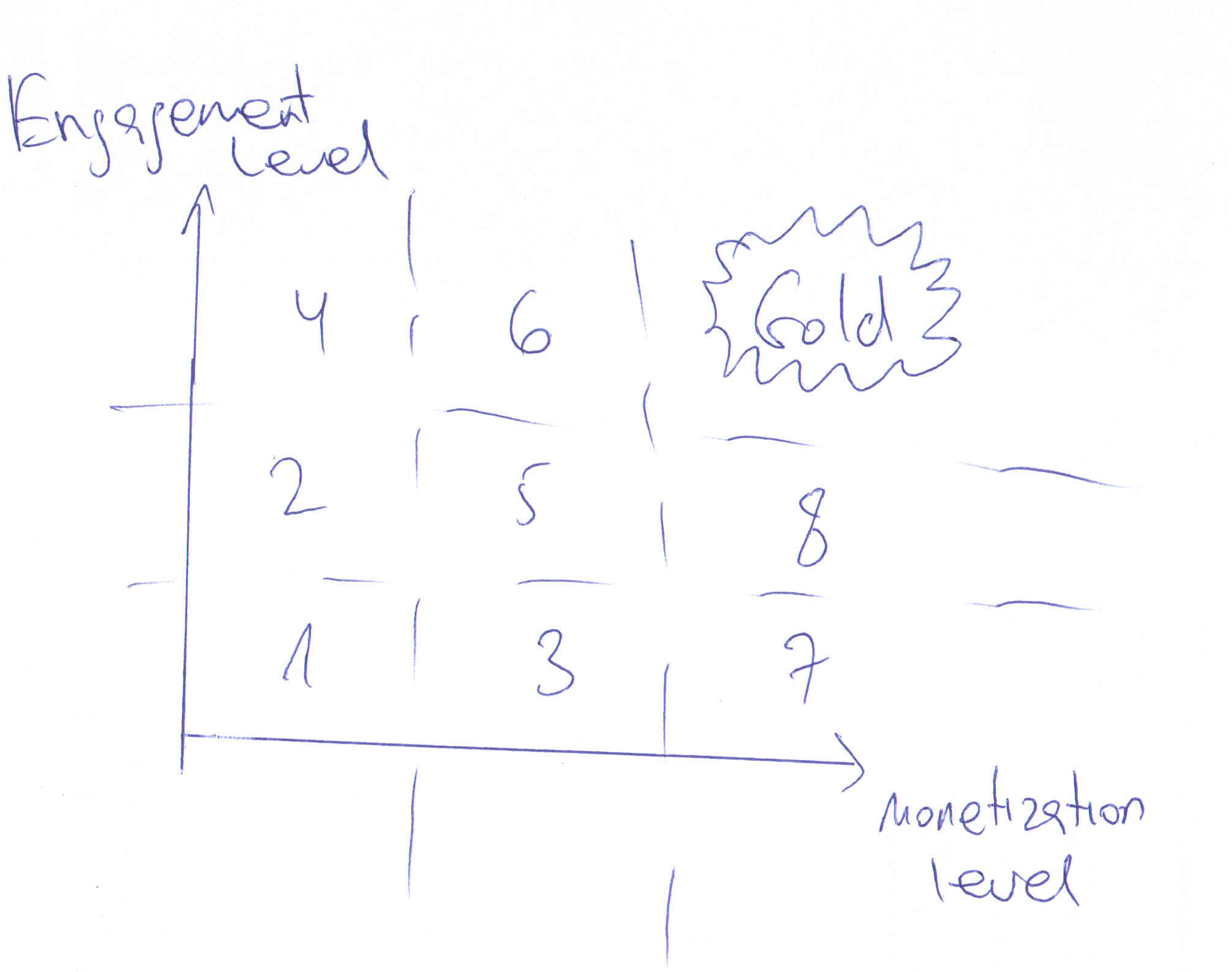 Now that you have an analysis of how your users behave within your game – you need to apply a strategy that will achieve both maximum monetization and retention, while expanding your user-base. There is no single recipe that would work across all games and all genres, but let’s review a few possible scenarios.

One approach to ad-based monetization has somewhat of a purist view, meaning that paying users need not be ‘bothered’ with ads. Putting aside the fact that by no means should ads be ‘bothering’ anyone (paying or non-paying) – games with this approach would normally offer an ad-free version to heavy IAP users, ads driving towards more IAP to medium payers, and value-exchange ads offering different levels of rewards to low and non-paying users.

Another approach is based on somewhat of a “trial-and-error” method, learning the user’s preferences towards IAP and/or ads. For example a user that rejects ad engagement a couple of times could be offered to buy the non-ad premium version, whilst a user who rejects a paid option to obtain an in-game advantage, could be offered to get it through value-exchange ads.

A third, and rather recent approach, focuses on maximizing personalization of ad-based content, studying not only the type of content to offer each player and user profile, but also the individual preferences of the user as to the ‘when’ during gameplay to receive and engage with that content. This means that different users will -or will not- be served with ads at different key engagement moments during gameplay – to extend game sessions, improve gaming experience, and increase users’ LTV.

Recent researches show that contrary to common belief, not only do smartly placed in-game ads not harm IAP revenue, at times it even increases it, and here are a couple of reasons why:

Granted – your whales are gold! Attract them, offer them VIP service all the way, and do whatever it takes to retain them. But the remaining 95% of your user base has amazing monetization and engagement potentials too – such that cannot be belittled!

It’s all a matter of which solution you implement, and how deep of an engagement you seek with your users.

Be it big-spenders, mid-spenders or non-spenders – if you offer user-focused quality monetization solutions, tailored to meet your users at the right time – you will achieve both higher revenues from IAP as well as extraordinary monetization of your non-paying user base.

Innovative technologies enable you to not only monetize a significantly larger portion of users than ever before, but actually improve the users’ gameplay, getting them engaged in your game for longer sessions, and re-engaged time and time again.  This obviously results in you benefiting from higher ARPU, an increased gameplay lifespan, and significantly higher life-time-value (LTV) per user.

Your game economy should be one of the core elements of your game development. While there still are a few game developers that fear ads might cannibalize IAP (in-app purchase) revenues, the vast majority of developers and publishers acknowledge that higher revenue is generated when implementing both IAP and smartly ad formats – provided, however, that they are integrated in a manner that complements and enhances the user’s experience, adding value to the user and making him want more.