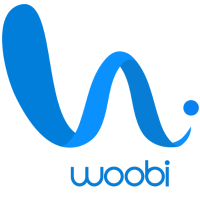 How to determine which of the many different digital advertising pricing models makes the most sense for your business.

Today’s digital advertising is filled with many different pricing options. Just a few decades ago, there only used to be two options: CPC (cost per click) and CPM (cost per 1000 impressions). Now there are dozens.

Pricing options have important implications on advertisers’ budgeting strategy. Yosef Peterseil, Woobi will help you to take a look at how advertisers should respond to the complexity.

At the same time,  publishers that run user acquisition campaigns are finding that making it to the top of the downloads charts doesn’t always result in increased user retention, life time value (LTV) or higher overall ROI – the primary purpose of any advertising campaign.

What does that mean for developers? You’ve got to roll out your best advertising campaign, and make it stand out, in order to capture the consumers you’re looking for. Part of that is the selection of the right pricing model for the campaign.

So which is the best app promotion campaign strategy − Cost per Install which ensures high volume downloads or Cost per Engagement which ensures actual user interaction with the app?

Specific to mobile applications, CPI is the price an advertiser1 pays whenever a user that was referred by an ad installs the promoted application. The CPI is set by the advertiser, and the payment is the multiplier: Payment = CPI * [Count of Installs].

In the CPA pricing model − also known as Cost per Engagement (CPE), and Pay Per Action (PPA) − the advertiser pays for specified actions such as registering as a new subscriber, signing up for a newsletter, watching a tutorial, completing a certain level in a game or making an in-app purchase, to name the most common ones. The CPA is set by the advertiser, and the payment is the multiplier: Payment = CPA * [Count of Actions], regardless of the number of installs (that is always higher than the count of actions, given that a user needs to download the app in order to complete the set action)

The key to the success of a CPE campaign often lies in the nature of the engagement, but not exclusively. You want the user to take that extra step, beyond the install, and get a feel of what your app has to offer. You also want to be able to track his entire conversion funnel, and optimize your traffic sources to yield the best results within your budget. Let’s examine how:

CPE campaigns are based on setting KPI’s (or Key Performance Indicators) that are beyond the point of install. KPI’s are basically parameters of engagement within your app. They can be used as a way to define a minimum requirement for billable installs as discussed, or as indicators that would help predict user quality from media sources after a relatively short time within a campaign.

One shouldn’t define reaching level 100, or 6 month user retention as the campaign KPI, but you can definitely pinpoint watching a tutorial or completing a level as a minimum requirement. If your app is good, and the right audience is targeted – the chances are you’ll be acquiring a lot more loyal, high quality, easier-to-monetize users than you would if you were focusing on just installs.

Your KPI’s combined with real-time monitoring and optimization tools will enable you to measure and dictate desired results at any given moment in your campaign’s life cycle.

Obviously you will be able to track the conversion funnel up until the point of user engagement (KPI fulfillment), but you can, and should, take it a step further. When you run CPA/CPE campaigns, you should be able to track and monitor actions beyond the campaign KPI’s, giving you valuable insight on your users’ behavior within your app, and their quality. For example, if your campaign KPI was to reach level 2 of your gaming app, using tracking and optimization tools, you can set an additional KPI at a later stage, say level 5, and analyze how this KPI indicates other, more important actions, such us making in-app purchases, obtaining premium items, uninstallations and so on. When there is a high correlation between this additional KPI and revenue generation, for instance, this KPI can be used in order to select the media sources you want to keep, and those you wish to discard.

Analyzing this information internally or with your advertising partner, you’ll be able to optimize your traffic sources and campaign mechanisms, and truly cherry pick the best users for your app.

It all boils down to your advertising campaign’s KPIs. As the parameters of engagement within your app, your Key Performance Indicators need to attain your objectives and be clearly defined and achievable before choosing an ad pricing model.

When you dig a bit deeper into the different models, and add rewarded/non-rewarded into the mix, there is another layer of cost efficiency and time-span that needs to be taken into consideration.

Let’s start with a few definitions:

This ad model rewards a user in exchange for completing an action – such as installing an app, completing a video ad view, engaging with an app, registering for a website, etc. the reward is typically virtual currency / game item, an upgrade, or a discount on a product / service.

This ad model promotes the app without the exchange of a reward, meaning that engagements generated with the app were solely out of initial interest in the app, yet there is no guarantee that the user will complete any further action.

Below is a table summarizing the different applications of incent/non-incent CPI/CPE and the main advantages and challenges of each scenario: 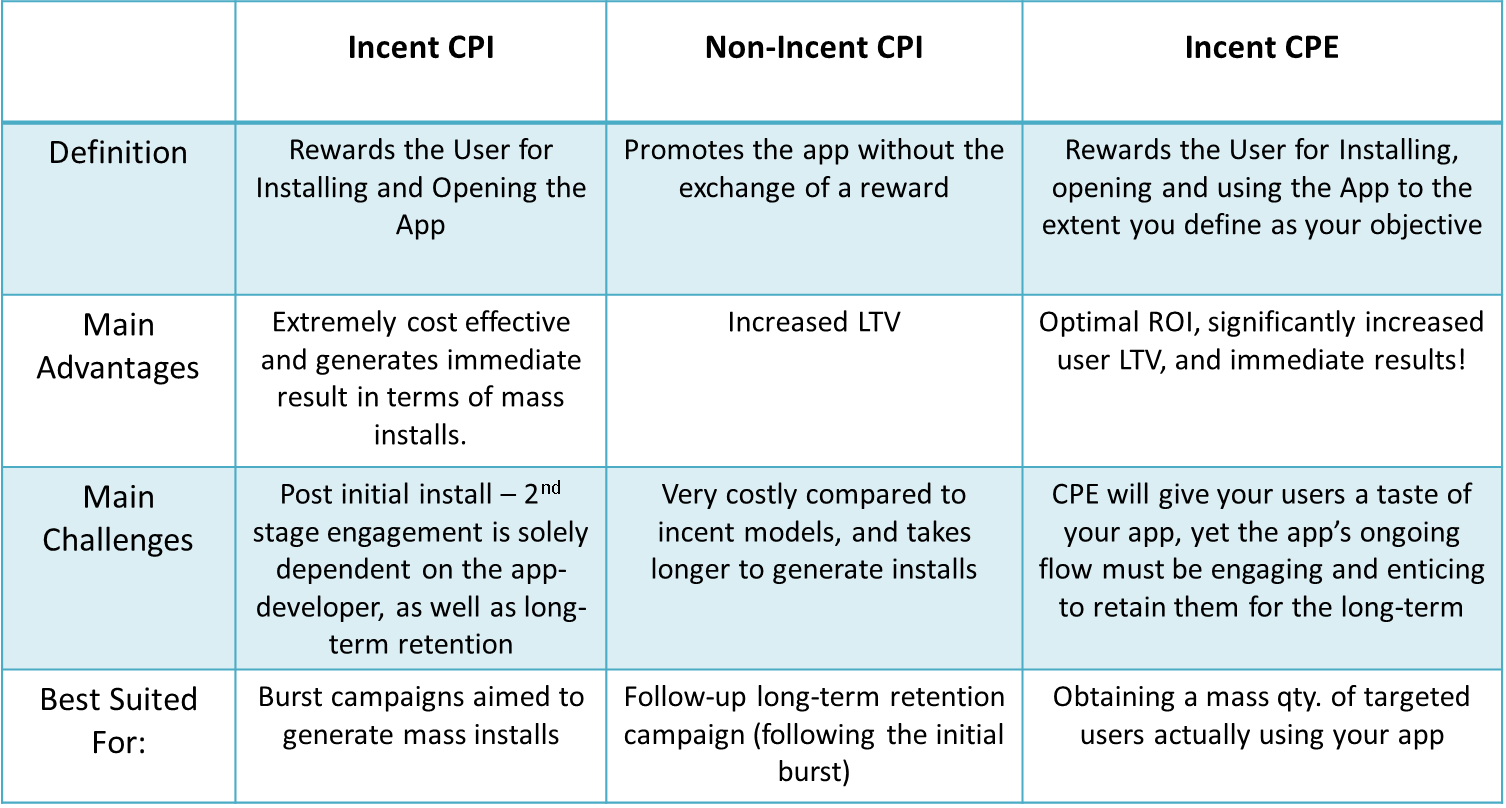 In a nutshell, ask yourself what you’re looking to accomplish as an advertiser. If you’re interested in getting your app out there quickly, in obtaining a mass amount of downloads and launching some sort of a ranking – a burst CPI campaign will be a good place to start, but you will need to widen your strategy for ongoing retention.  If you want more focus on user quality, and would rather invest in seeking active users rather than mass downloads – CPE is the way to go. Then, depending on whether you are using incent or non-incent and your budget in terms of cost and time spent, you will be in a position to decide which campaign model (or combination) would be best for your needs.